A Little Girl With a Huge Fighting Spirit

"IT'S AMAZING WHAT A YEAR WILL DO!"

After what Breezzye Weir describes as an amazing pregnancy, her daughter, Riley Gutierrez, was born in December 2018. Shortly after she was born, a port-wine stain was noticed on Riley’s face and arm, and she was quickly taken to the Neonatal Intensive Care Unit (NICU) where she stayed for three weeks to undergo testing.  “At first, the doctors ruled out diagnoses like Sturge-Weber Syndrome so we figured she had a birthmark and took her home. But at three months old, she had her first seizure.”

Following that terrifying night, Riley was back in the Pediatric Intensive Care Unit (PICU) where she spent a week undergoing more testing and evaluations. The medical team performed a MRI on Riley and this time her progressive vascular disorder showed up clear as day and she was diagnosed with Sturge-Weber Syndrome. 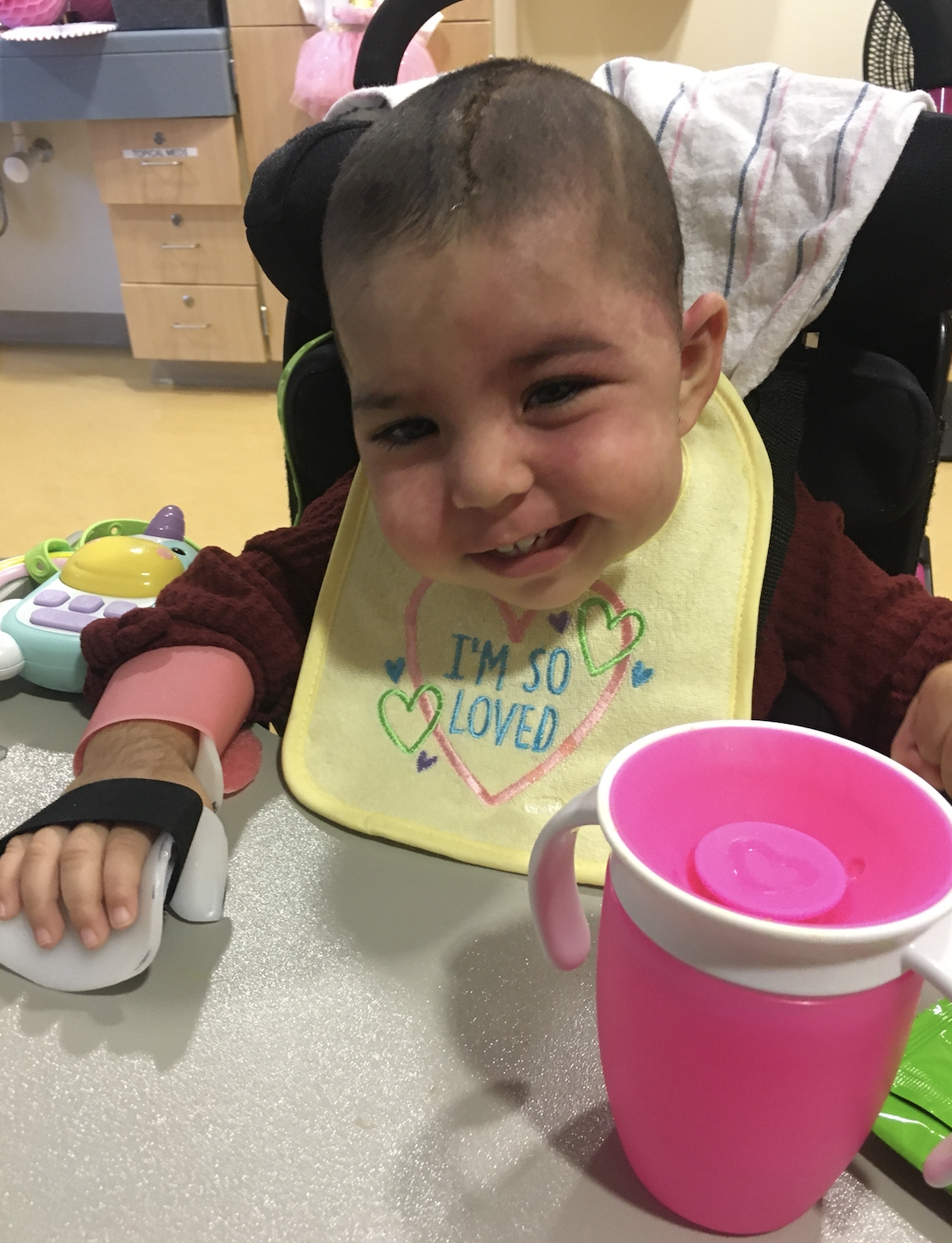 Sturge-Weber Syndrome is a rare progressive disorder characterized by the facial port-wine birthmark, neurological abnormalities, and eye abnormalities, although some patients may only develop one or two of these symptoms. “The results were clear that our baby had this malformation in her blood vessels causing abnormal blood flow and blockage to the left side of her brain, which affected the right side of her body, causing the seizures,” shares Breezzye.

With a confirmed diagnosis, Riley was put on anti-seizure medications but every month and a half she would experience another seizure causing her to end up back in the hospital. In July 2019, it had been almost three months since Riley had experienced a seizure – the longest span of time without a seizure since her diagnosis – and she was doing well. But in October she experienced her worst seizure to date and it was clear that further intervention was necessary.

In November 2019, at only eleven months old, Riley was admitted to the hospital once again, this time to undergo a scheduled hemispherectomy.  Performed in children who experience severe and uncontrollable seizure disorders, a hemispherectomy is a neurosurgical procedure in which half the brain is removed, disconnected, or disabled.

After the procedure, Riley was transported to Children’s Specialized Hospital’s (CSH) Inpatient Facility in New Brunswick for rehabilitation. “I was praying that we would be able to get her in there,” shares Breezzye. “I was familiar with the hospital, Riley’s grandmother is actually a Nurse Practitioner there, so I knew about the amazing treatments and therapies that they provide. They see miracles every day and I knew that would be the best place for Riley.”

After surgery, Breezzye lived in the hospital with Riley over the next few months, which allowed her to receive all the care and rehabilitation she needed. “It was a great experience. The staff was wonderful and even though we had to celebrate her first birthday in the hospital, everyone there made sure it was celebrated and special for her.”

Additionally, much of Riley’s occupational therapy included working on participating in age appropriate self-care activities like pulling off socks and self-feeding during mealtimes. “Riley was such a sweet little girl,” shares occupational therapist Danielle. “She loved snuggles and whenever she was tired, she would just snuggle up on your lap and let you know it was time for a break.”

For speech therapy and feeding therapy, Riley worked with her therapist specifically on expanding her diet and accepting more solids foods.  By the end of her stay, she relearned how to eat puree solids, was continuing to work on her chewing and learned how to drink by straw. “Initially she was not turning her voice on, but as time went on, she was making some babbling sounds and waving during sessions.  She was also reaching for toys and definitely full of smiles,” shares her speech language pathologist, Alexandria.

In February 2020, Riley was able to go home. “We went home February 11th, 2020. I’m so grateful for just moving forward this year. Even with the COVID-19 pandemic and being under quarantine, I was grateful I was home with my baby and able to spend time with her.”

Even with a number of restrictions in place with the pandemic, Riley continued to receive the treatments and therapies that she needed as an outpatient, thanks to telemedicine.  “Everyone at Children’s has been wonderful and there every step of the way for all the recovery tools we could need. It’s made everything Riley has been through not seem so scary.”

Today, Riley continues to visit Children’s Specialized Hospital for outpatient therapy, including occupational and physical therapies, feeding therapy, early intervention and speech therapy. “Our entire apartment is not only kid-friendly but is set up so we can incorporate what she’s doing in therapy while she’s home in between sessions as best as we can,” shares Breezzye.

Riley also worked with the Rehabilitation Technology team at Children’s Specialized Hospital and recently received her very own gait trainer and custom supportive seat. “Mary and the entire team was great to work with. We received Riley’s custom gait trainer in October. That feeling of watching her stand for the first time was so meaningful—it changed everything.”

Breezzye shares that outings and trips used to be very cumbersome and would be a source of anxiety for both her and Riley, “she hated being in the stroller. She wanted to get out and explore and now with her gait trainer, she is able to be more interactive and engaged. She’s so happy feeling free to move, to walk!” Recently Breezzye and Riley went on an outdoor outing and Riley was able to feed some animals at the petting zoo. “Even small trips like going to Target have changed. We went the other day and Riley was able to sit in the shopping cart for the first time with her new custom seat. It was such a nice experience not being worried about her falling over and just enjoying a shopping trip together. It felt so reviving!”

A year after Riley’s hemispherectomy, Breezzye reflects on the journey she and her daughter have shared, “I really cannot say enough great things about everyone at Children’s. We are beyond blessed. We had Riley’s grandmother there with us every step of the way, from the first seizure to our admission on her floor where she was the charge nurse at the time. The entire staff, Family Faculty, all the night and day nurses, Doctor Y and Evelyn, and all the great therapists and members of the team that went above and beyond to help Riley and I move forward. We’re super lucky.”

Just shy of her second birthday, Riley giggles in the background as Breezzye shares her story. “It’s so funny, whenever I’m on the phone she cries and makes noise trying to get my attention to get off the phone to play with her. But whenever I’m telling her story, she just giggles and smiles. It’s like she knows I’m talking about her!”

Being home and continuing her outpatient treatments at Children’s Specialized Hospital has helped Riley to continue hitting milestones, “when she first came home, she could barely hold her head up on her own. Now she can scoot around the living room on her own! I keep saying, it’s amazing what a year will do!”