A painter, singer and writer, Taina Richards was born to be different! When Taina was 12, she started feeling a constant numbness in her left leg. After visiting the doctor, she was diagnosed with Antiphospholipid syndrome (APS), an autoimmune disorder in which the immune system mistakenly creates antibodies that make the blood much more likely to clot. She was prescribed a blood thinner to manage her condition and reduce the risk of new clots forming.

The blood thinner kept the APS at bay for a while, but towards the end of 2019, now 15 years old Taina began to feel pain and a tingling sensation in her left leg that extended into her foot and toes. Her mother, who is a nurse, suspected the pain to be blood clots and immediately took her to the emergency room. The doctors confirmed her mother's fear that the blood thinner was no longer breaking down her clots and the blood flow to her lower leg and foot was severely restricted.

Taina spent the next two months in the hospital as doctors tried to remove the blood clots in her leg through surgery but had no success. A few days after surgery, Taina was in excruciating pain and her foot began changing color. She was transferred to Robert Wood Johnson University Hospital in New Brunswick, NJ where they attempted to dissolve the rest of the clot with medicine and several rounds of plasmapheresis (or plasma exchange). When it became evident that the surgery and subsequent treatments were not working to increase blood flow, Taina and her mom were faced with the realization that her keg would need to be amputated below the knee.

After a successful surgery, Taina was transferred to CSH in New Brunswick where she stayed for 34 days and began her inpatient therapy. Just being a CSH made both Taina and her mother feel more confident because they knew they were in the best place for physical rehabilitation and occupational therapy.

Looking back on her arrival and CSH, Taina says, "At first I thought that I was going to be the only kid my age. Once I saw that there were other kids that have disabilities there and met my therapists, I knew that everything was going to be okay."

Taina Describes learning to walk again as the biggest obstacle she had to overcome. "Before I received my prosthesis, I had to learn how to get up the stairs with one leg and I thought I would never be able to do that," she says. She learned in stages, first moving with a walker, then crutches, a wheelchair, and finally, walking with a prosthetic leg. Taina and her family credit the child life team and therapists at CSH for her success. Because of them, she felt fully prepared for life after CSH and had the confidence she needed to get around on one leg independently until her prosthesis was ready. Her mother expressed gratitude to Taina's physical therapist, Marissa Corveleyn, and occupational therapist, Megan Buckley, saying, "Taina's therapists helped her every step of the way. They pushed her just enough and were patient with her in those moments that she was in pain and needed extra encouragement." 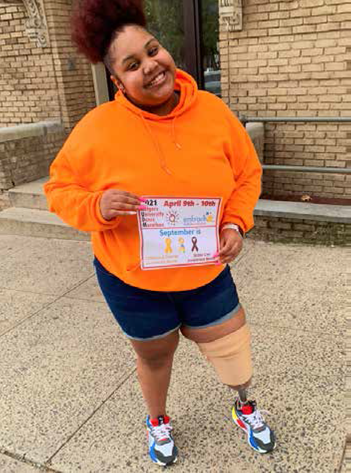 fun at the same time. With her hard work and the help of her doctors and therapists, Taina was able to meet her goal of being discharged on the date she had previously chosen. She continues working on building her strength through outpatient therapy at our Mountainside facility twice per week.

What is so exceptional about Taina is her contagiously positive attitude that prevailed throughout this lifechanging experience. She says, “Losing the lower part of my leg is a physical change, but it doesn’t change who I am. I’m still the same me. Of course it has been stressful at times, but I have an incredible

support system in my family and friends. When I get down, they help me pull myself right back up.” She continues, “I want to be an inspiration to others. You never know what you are capable of until you have to do it. I hope that sharing my story will let other kids

Dr. Michele Fantasia, M.D., Pediatric Physiatrist, was part of Taina’s care team and marveled at her resiliency. “As can be expected, every patient experiences a level of reactive depression after an amputation, but Taina adopted a positive attitude very quickly.” She continues, “Taina is a brave young woman who showed a maturity beyond her years. She was motivated and took charge of her own care so she could get walking again and get back to living her life.”

Taina doesn’t like the word “dreams” because she believes anything is possible. Instead, she prefers to focus on “goals.” She is back to doing the things that she loves most—spending time with family and friends, meeting new people, painting, singing and writing. Her goals include passing all of her classes at the performing arts high school she attends and going to college this fall. Taina aspires to become a clinical psychologist so she can help people facing life-changing or traumatic events. Inspired by her own experience and the support she received from the staff at CSH, Taina would love to work at CSH one day so she can offer the same comforting support to patients that she received. When asked what advice she would give to other patients and families, Taina responds, “Remain positive and when life gives you lemons make lemonade. Talk to people about how you feel, try to join a social group with parents and children who are going through similar things.”