the story of one little girl defying all the odds

The prognosis is dismal. That’s what Kayla Sloshay read about her two-year-old daughter’s diagnosis when she gave in to the temptation to Google it. Tova Sloshay had just been diagnosed with an extremely rare ETMR (embryonal tumor with multilayered rosettes) brain tumor that almost exclusively occurs in children under four-years-old. A woman of great faith, Kayla was not about to let this shocking prognosis dash her hopes for her daughter’s future nor steer the decisions for her care. 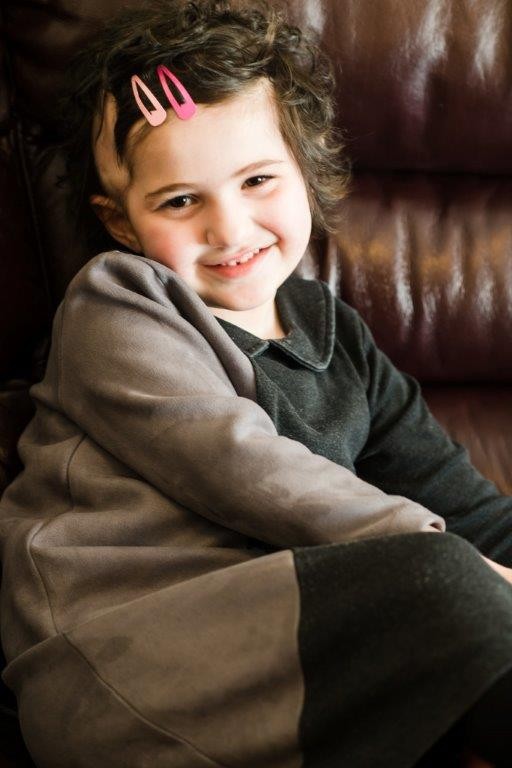 In late 2019, the Sloshay family was on vacation in Vermont when they noticed that Tova did not seem to be using both sides of her face when she smiled. Knowing they would be going home the next day, Tova’s parents watched her closely and noticed that she began to avoid using her left hand. By the time they got in the car for the five-hour drive back to New York, Tova was crying that her left foot hurt and was holding her left arm across her body with her hand curled like a claw. Kayla remembers holding Tova’s foot for the entire drive so she could be comfortable.

Tova saw her pediatrician immediately upon returning home. The doctor suggested that the paralysis in her face might be Bell’s palsy caused by Lyme disease, but he could not explain the cramping in her left arm, leg and foot and recommended that they see a specialist. Tova's father brought her from their home in Rockland County, New York to the emergency room at a top New York City hospital.  When an MRI showed a large tumor in the frontal lobe, Tova was immediately brought in for surgery.

The three-hour surgery was successful but now Tova faced an intensive treatment protocol including high-dose chemotherapy, proton radiation, and bone marrow transplants. After months of treatment, Tova developed radiation necrosis that caused semi-paralysis on her left side. Kayla knew that finding the best physical therapy program would give Tova the greatest chance for reaching her full potential and living her best life. Knowing about Children’s Specialized Hospital (CSH) from a neighbor, Kayla made arrangements for Tova to be admitted as an inpatient at our New Brunswick hospital in late 2020.

Living with Selective Mutism, Tova often needs some time to warm up to new people and new situations. Undergoing surgery, an intense treatment protocol and moving to CSH for therapy all in a year’s time was a lot for her to handle, but with a strong family and incredible community support, Tova kept a remarkably positive attitude throughout. Kayla noted that Tova felt comfortable and at ease at CSH and reflected on their inpatient stay. “The staff, from cleaning crew to child life to therapy to nursing, was incredible to work with. Everyone was so kind and caring and wanted to make sure that our specific needs were met.” She continued,
“I have a preferred hospital in New York that I choose because the staff is so kind. When I got to Children’s Specialized I couldn’t believe that the staff here was even nicer!”

Tova stayed at CSH for six weeks where she worked on improving her strength and mobility through physical, occupational and speech therapy. As the youngest of six children, adored by her entire family, Tova has a very sweet and easy-going personality and is sometimes just as happy being carried or riding in a wheelchair than walking. But at CSH, she learned to put in the effort during her therapy sessions and made great progress. Her favorite part of therapy was playing with the dolls in the gym that she named Stripes, Cupcake, and Brownie. Kayla couldn’t be more grateful for the care Tova received and the attentiveness of the CSH staff “I was so impressed with communication between the therapists. Tova was seen by several specialties but I only had to tell one therapist about an important piece of information and they would all know.” She continued “I was also blown away by the way the staff accommodated our religious observance. They even ordered glatt kosher Thanksgiving meals for us when they were providing meals to all of the families, which was way beyond our expectations.”

In addition to Tova’s care team, Family Faculty, which is made up of parents and family members whose children have received or are still receiving care at CSH, was one of the services Kayla appreciated most during her time at CSH. Because of their own day-to-day experiences, the staff that makes up our Family Faculty provides a unique perspective, understanding and empathy for families going through similar situations. Kayla believes in always looking for the positive in every situation, accepting help and talking to other parents to help get you through tough times. Living at the hospital with Tova under COVID-19 restrictions allowing no visitors was tough, so Kayla appreciated the programs that offered a sense of inclusion and community. She recalled excitedly, “I really appreciated the Monday afternoon groups and I loved the Wednesday evening painting!”

Tova has overcome so much already in her young life—more than any child should—but she  handled it all with an astonishing grace and positivity. Now back at home, she continues outpatient therapy as often as she can and enjoys going to school where she is becoming more social and engaged. Tova is excited about going to her sister’s school next year and getting to wear a uniform. One day, she wants to go on safari in Africa to see the “aminals.” Despite all they’ve endured, and that initial ‘dismal’ prognosis so abruptly presented on the computer screen, Kayla has faith that Tova will grow up to live a full life and have children of her own one day, thanks to the incredible medical teams that provided such exceptional care when she needed it most.