Briana Olivia Lopes had no idea that the call she received on the afternoon of January 8, 2019 would change her life. Her son, mother, and nephew had been in a car accident - but she and her husband had just bought a new SUV ranked highly for safety for this exact reason, so she figured the worst it could be was a few bumps and bruises. What she didn't realize at the time was that they were hit as pedestrians.

While walking home from school, a vehicle jumped the curb and struck the three of them from behind. Olivia’s mother suffered two broken legs, a broken tailbone, and facial reconstructive surgery. Her nephew broke his femur, arm, and jaw. Her seven month old son, LJ, was being pushed by his grandmother in a wagon that his car seat was placed in – as a result of the impact, the stroller’s seat dislodged and became airborne, landing LJ 70 feet from where they were hit. Tragically, he suffered the most extensive and life threatening injuries.

“I received the call at 3:15 in the afternoon and I wasn’t able to see LJ until 10:30 that night,” said Olivia. “When we did finally get to see him, he was on life support. He had multiple skull fractures, orbital fractures, severe brain trauma, a broken leg, and was having difficulty moving his right arm.” 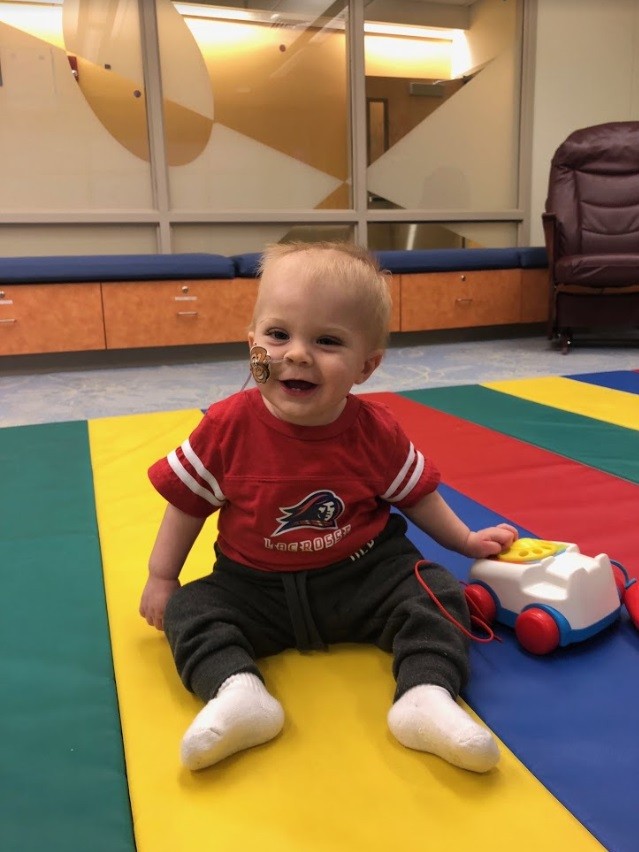 LJ spent 21 days in the Pediatric Intensive Care Unit (PICU) before being transferred to Children’s Specialized Hospital’s (CSH) Inpatient Facility in New Brunswick, NJ. He was admitted to the Brain Injury Program where his neurological status, function, nursing and medical needs as well as his fine motor functions were carefully evaluated and assessed. His team of specialists then developed a customized rehabilitation program to address his medical, physical, cognitive and psychosocial needs.

However, on February 7, only a little over a week since he’d been admitted to CSH, LJ’s family and care team could tell something was not right.

“LJ just seemed off,” said Olivia. “He was really tired and irritable which was totally out of character for this normally happy, smiley kid. The care team at Children’s Specialized had him transferred and admitted into the emergency department at RWJ University Hospital where he had a CAT scan and it was discovered he had hydrocephalus.”

Hydrocephalus is a condition in which excess cerebrospinal fluid builds up within the ventricles of the brain and increases pressure within the head causing head enlargement, headaches, impaired vision, cognitive difficulties, and loss of coordination. To release this pressure, LJ was transferred back to his neurosurgeon who surgically inserted a shunt into his ventricle to drain the excess fluid.

LJ returned to Children’s Specialized on February 11 to continue his rehabilitation journey. While there his second time around, he bonded with his inpatient team and excelled in aquatic therapy.

“After his surgery, LJ began to make phenomenal strides with the team at Children’s Specialized,” said Olivia. “Once they got him in the pool, there was no stopping him. He had spent a lot of time in the pool last summer, so I think getting him back into an activity he enjoyed prior to the accident really helped with his rehabilitation. The resistance of the water also forced him to start using his right arm more.”

LJ spent another two months at Children’s Specialized working with physical, occupational, speech-language, and recreational therapists to work on regaining the skills he had prior to the accident.

“The progress he made at Children’s Specialized was amazing,” said Olivia. “After the accident, he lost all of his muscle memory and couldn’t hold his own head up – it was almost as if he was an infant again but he was in this eight month old body. The team at Children’s worked with him day-in and day-out, helping him to learn how to roll, crawl, stand and walk again.”

LJ went home on April 8, three months after that horrible afternoon in January. He is now attending outpatient therapy sessions three days a week at the CSH location in Hamilton, working hard in physical, occupational, and speech therapy to build strength in his right arm and learn how to suck and swallow properly.

Although Olivia hopes that no other parent finds themselves in her shoes, she would tell them to hold onto hope and find a care team that will work with their child unceasingly until they reach their full potential.

“I would most definitely recommend Children’s Specialized to anyone going through a similar situation,” said Olivia.

“They offer remarkable programs and services, and I could tell the therapists and care team really cared about their work, and most importantly, LJ. They took the time to explain to us what they were doing and why so that when they weren’t around we could continue LJ’s therapy and help speed up his recovery. We still keep in touch with them, updating them on LJ’s progress – we’re forever grateful for the care they provided to our son.”